It’s Vampirism Mod 1.18.1, which is about to be released! Vampirism Mod will bring you into a world of new opportunities and dangers with different features that are not available in vanilla version. Vampirism has its downside, so it’s important to know how to protect yourself from the sun or vampire hunters before trying this mod out. However, there are some rituals that allow you to become more skilled as a vampire and gain special skills like “Bat transformation” or “Revive the fallen”. 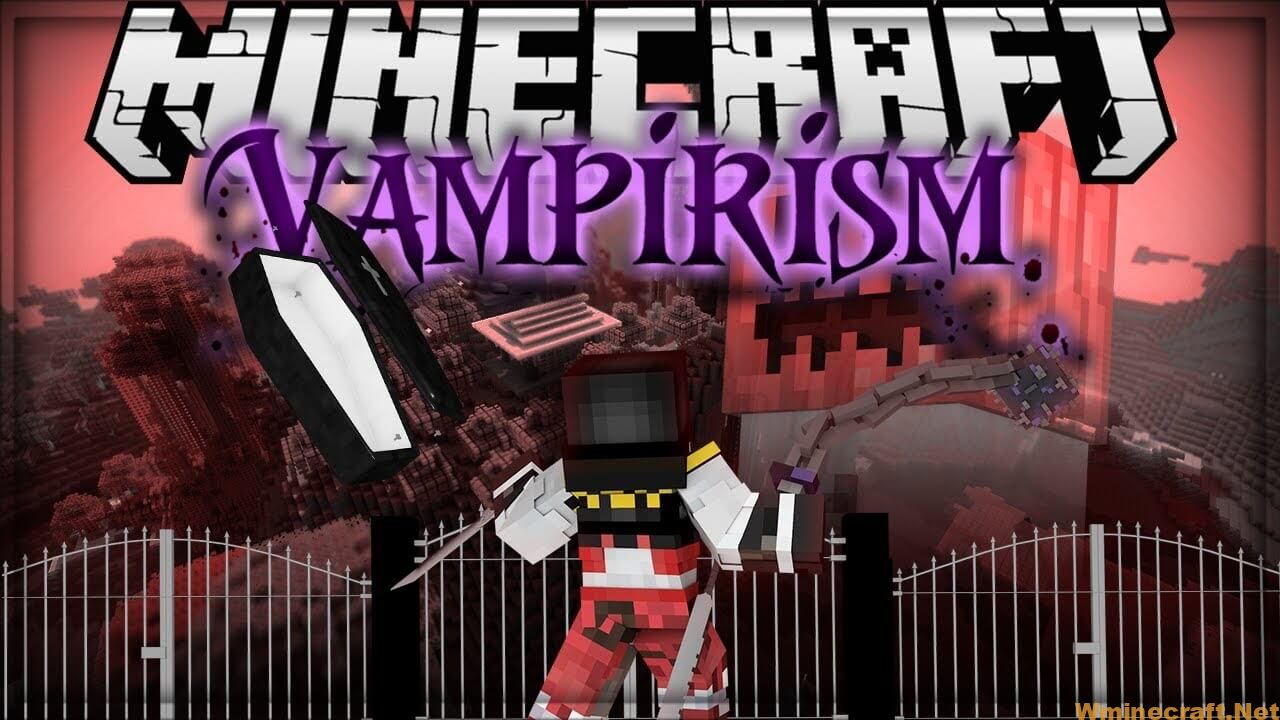 Coming to the game, people will hope they will experience many different types of fun. Each game will have its attractions for players. Especially the Minecraft open-world game, it helps players feel interesting things and allows them to experience many interesting adventures. Thanks to the mods created, Minecraft can satisfy many different types of games. You can experience a vampire world with Vampirism Mod 1.16.3; this mod will turn you into a vampire, help you level up and have experiences like a real vampire. Join us to learn carefully about this mod.

What is the vampirism mod in Minecraft?

Inspired by the blood-sucking demons in the legend, Vampirism Mod focuses mainly on the player surviving in the vampire world to become a hunter or if unfortunately turn into one of them. When bitten by a vampire, the character will get an effect called blood poisoning, if the duration of the effect expires without finding an antidote, the character will be turned into a vampire.

Are vampire weapons compatible with mods?

Vampire hunters only care for vampires, and they make no attempts to attack other monsters threatening villages such as zombies. Vampires cross running water to minor effect- sometimes they're seemingly weakened by it but not slowed. While wooden weapons do extra damage to vampires, there is no compatibility with mods that add silver weapons. 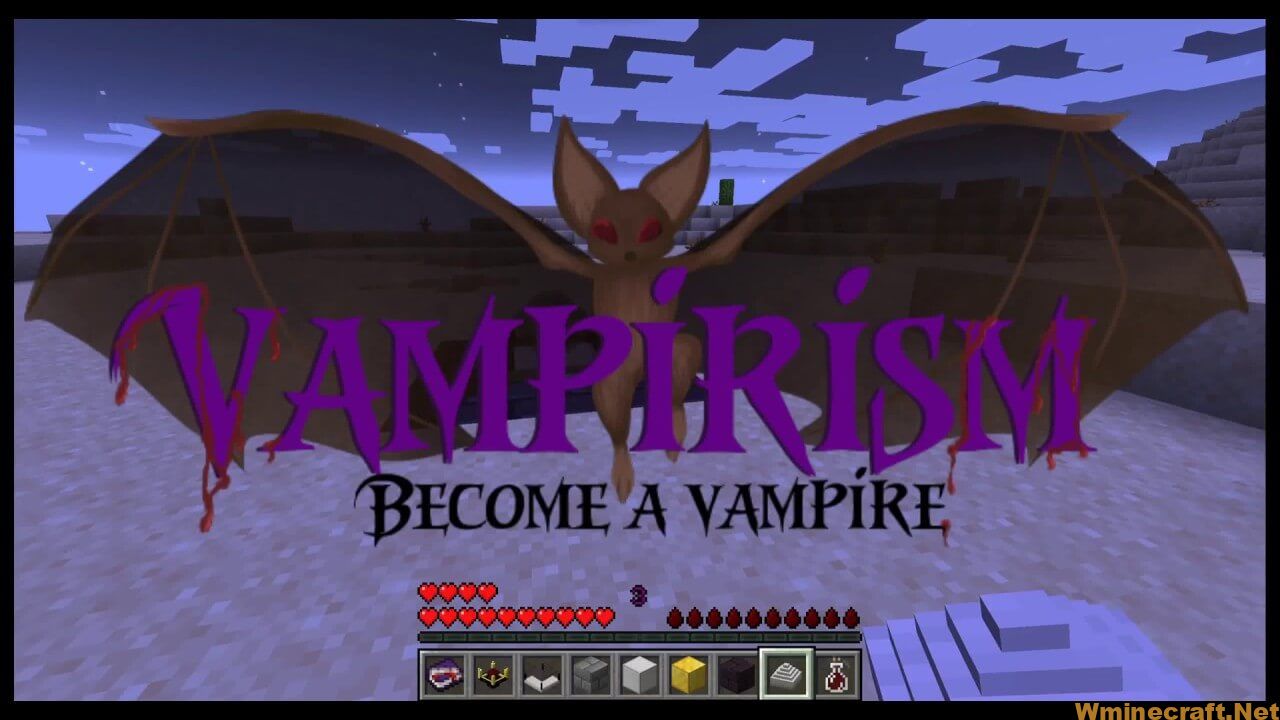 When you become a vampire, you do not need to eat or drink anything, just go find villagers and take their blood and then use it, just like a real vampire. Rituals can also be performed to power you up, turn you into high-level vampires, or maybe a vampire lord.

Vampirism Mod 1.16.5 added several new rituals, allowing the player to transform into a vampire for the first time and then level up. At a higher vampire level, you will move faster, stronger, and move in the dark better. Of course, in this new role, you will also encounter some limitations such as: being injured in the sun or being captured by vampire hunters.

At a higher vampire level, you will move faster, stronger, and move in the dark better./Ph. Mc-mod.net

By performing a few more special rituals, the player will turn into a skilled vampire and possess some unique skills such as transforming into a bat or reviving when falling. If you’re a vampire, you don’t need to eat all kinds of dry bread or exotic fruits like apples. On the contrary, what you want is to suck blood from animals or neighbors. But be careful because not all animals suck blood.

When participating in Vampirism Mod, the experience of being a real vampire will become very easy. It will create an exciting adventure for you, with lots of experiences.

As a vampire you don’t need to eat that dry bread or these strange fruits called “apples”, you prefer some red and tasty blood, which you can to suck from animals or preferably villagers. If you are careful they might regenerate their blood over time, but if you suck all their blood at once, they might become vampires as well. You also might notice that you got red eyes and fangs.

In the beginning you are a very normal and weak vampire, but by performing vampiric rituals you can level up and gain new powers. Besides becoming stronger and faster, you get skill points which can be used to unlock abilities like night vision, transformation into a bat, teleport and many more.

However, becoming a strong vampire also has it’s drawbacks as you start taking more damage from the sun and have to face stronger vampire hunter. So you probably want to shift your activities to the night, unlock night vision and craft yourself a coffin to sleep through the day. Don’t forget to colour your coffin to make it the rest of your home decoration.

If you don’t like vampires, this might mod might still be interesting. You can choose to become a vampire hunter instead and start hunting down those evil vampires. Equipped with crossbows and other useful weapons you can jump into action. By collecting items, fighting strong vampires and exploring the world you can level up and unlock advanced skills which improve your hunting ability or even allow you to use some of the vampires powers.

There are a few additions to the world. Besides new mobs there is a new biome called vampire biome. This foggy biome mostly accommodates vampiric creatures and is the home of vampire barons you need to fight for some ritual items.

Since vampires like to suck blood from villagers, they are now protected by vampire hunters. If too many people in a village are bitten they will call for reinforcements or if it gets too dire, the villagers will just grab their pitchforks and start hunting vampires themselves.

Villages can be controlled by a vampires or hunters which grants them additional benefits. If you want to capture a village you can start a raid.

This mod plays well on multiplayer servers. Players can choose to join the vampire faction or the the hunter faction or even mostly ignore this mod if they want. You also can enable PVP only between factions, so the war between vampires and humans can take place organized.

Most hostile creatures appear in different levels. The strength of a spawned creature is affected by the level of nearby players. Around strong vampire players, strong hunters will spawn, but around normal humans only weak vampires will appear.

For common places (e.g. spawn) you can place (cheat only) sunscreen beacons, so vampires can visit them during the day without taking sun damage.

There also is a Morpheus like config option, where you can specify which percentage of players have to be in a coffin to make it night. Also interesting might be the option to allow/deny players from infecting other human players with vampirism (hunters are immune due to their garlic injection). 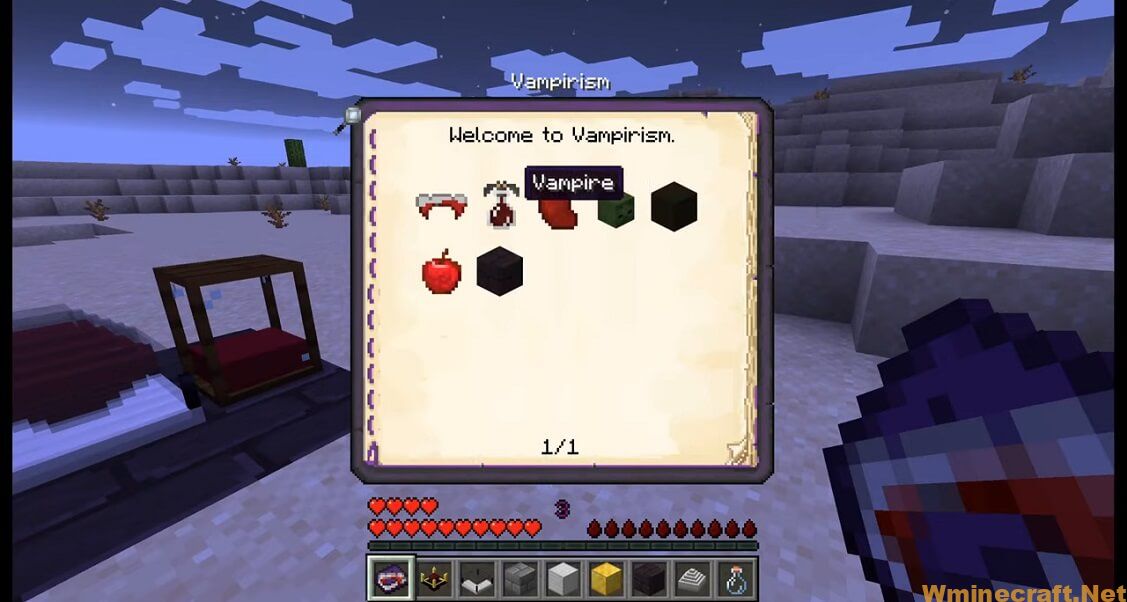 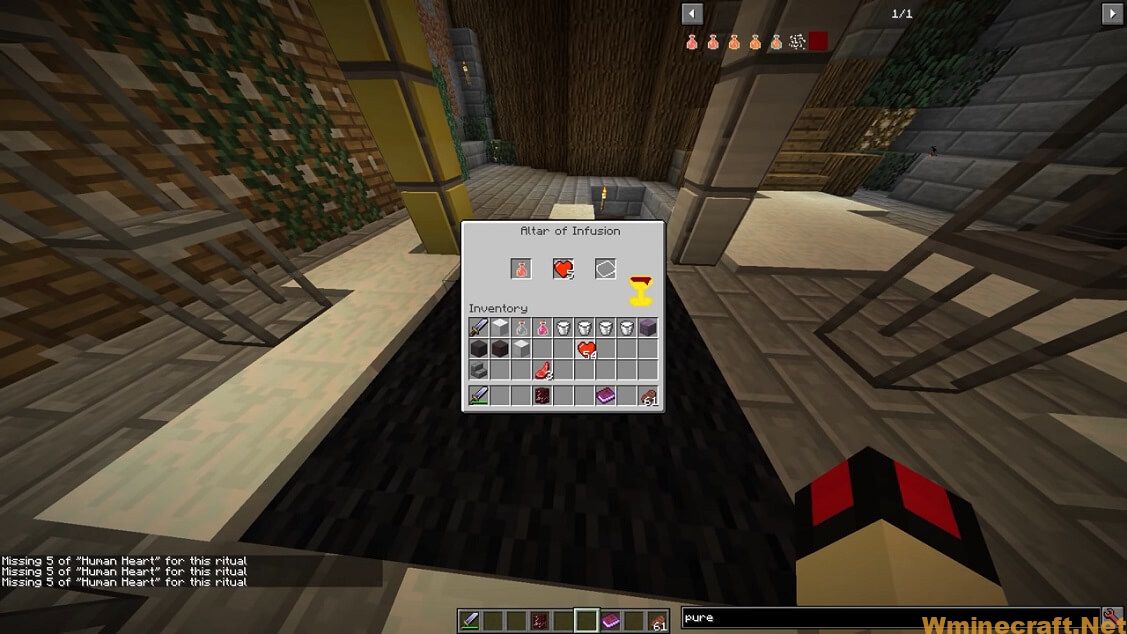 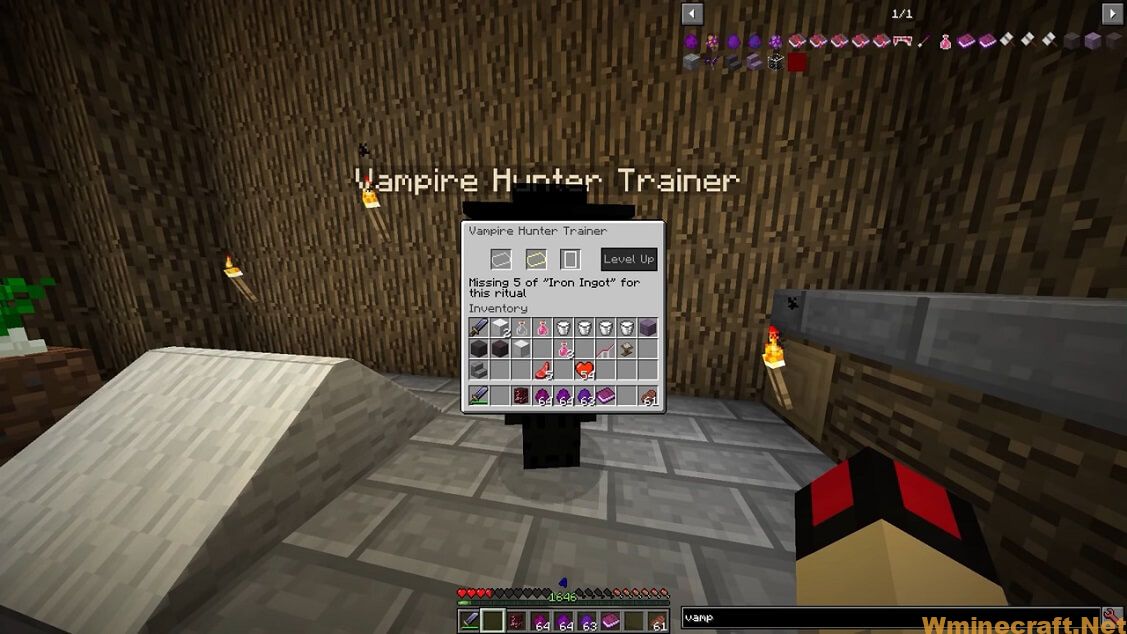 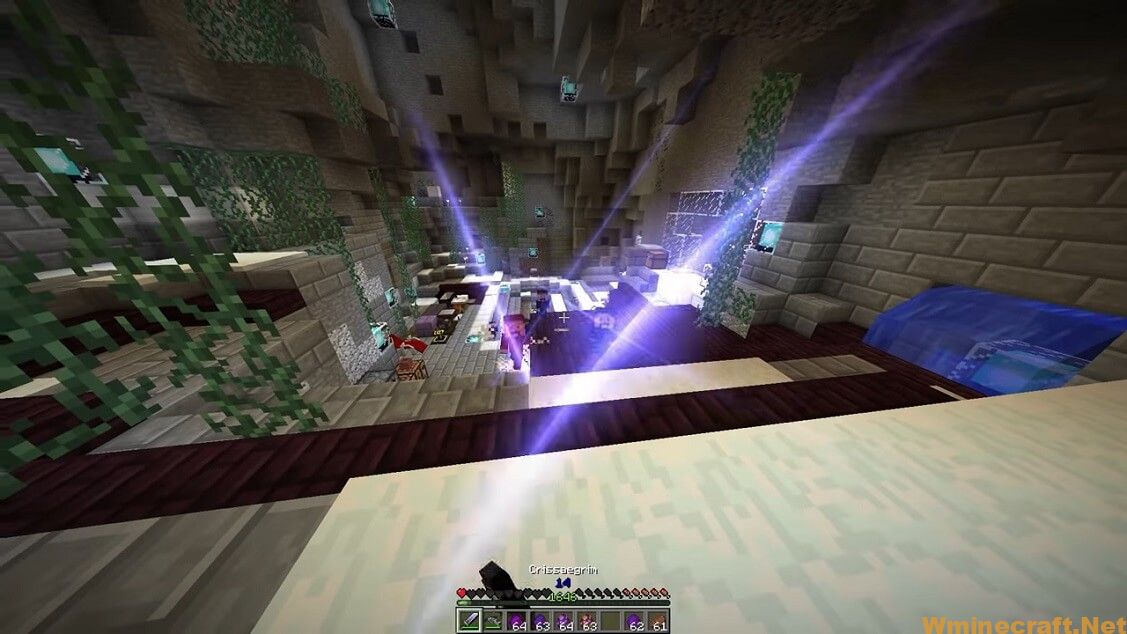 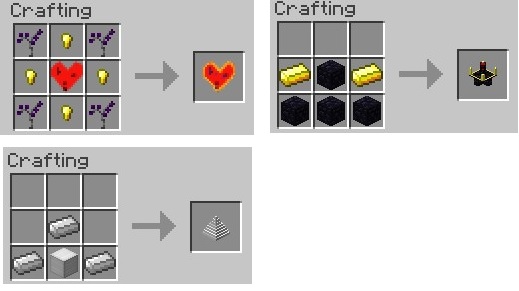 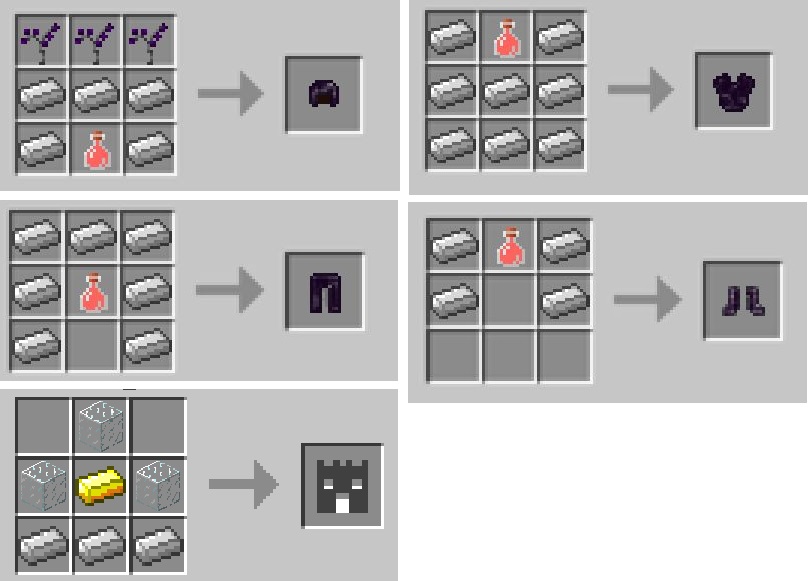 How to install Vampirism Mod?

Vampirism Mod 1.16.3 is one of the mods that will definitely give you an interesting experience, the level features or changes in this mod are very new to players.