Welcome fellow treasure hunters! Sword of Light is a traditional style adventure map, inspired by the popular Zelda game that was designed to be played by 2 players. It includes six unique dungeons, challenging bosses, over 5 hours of gameplay, and scenery built block by block without any use of world editors! The story follows two adventurers as they journey across the land in search of a hidden treasure. However, lately there have been reports of a “dark power” causing monsters to appear. But our heroes aren’t afraid- they think it’s all just superstition! Will they find the treasure despite this alleged threat? Download Sword of Light and find out for yourself!

In order to defend the planet from a secret darkness, you must traverse various landscapes and battle your way through six distinct dungeons while slaying creatures, solving puzzles, and jumping parkour obstacles. This map has been in development for for four years, and to give it the sense of a classic Minecraft adventure map, every block was manually placed on the map without the aid of world editors. 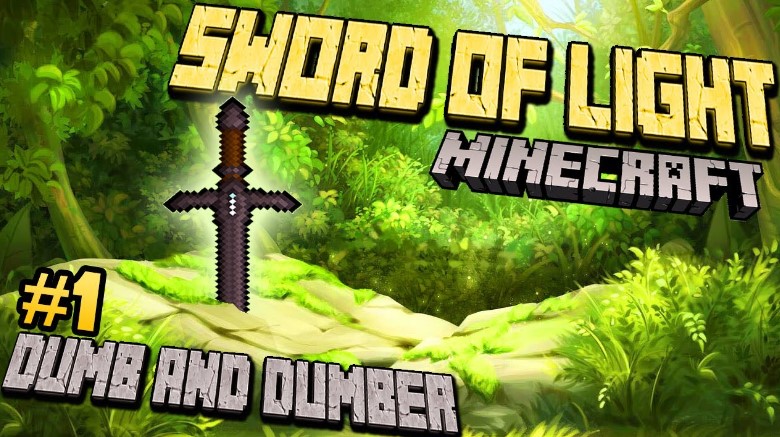 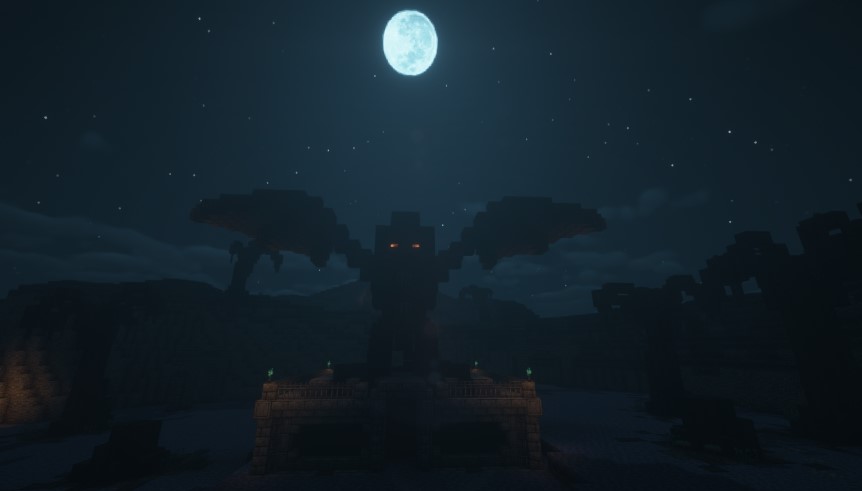 How to Install Minecraft Maps after Downloading Them

Some information about the Sword of Light card

Stunning map! Over the course of a week, we played it together and had a blast! I appreciate you making it! We never got lost because every switch, pressure plate, and button worked flawlessly. We also admired the design of the map itself. The only things I’d want to see changed are the NPCs’ dialogue options once their region has received assistance, and perhaps some potions for night vision as it can get rather dark at times. Regardless, we really appreciated the map.

Hello, we recently completed this map! The best map, in my opinion. all the ratios are great!
I would admit that the parkour is a little challenging, but we made it! and occasionally the distance between checkpoints was too much!

Thank you for creating such a fantastic map; we had a great time using it.

Hello, just finished playing your map! Spoilers ahead for those who haven’t played it.
I have a bit of experience with map making so I of course have some feedback!
But before that, congratulations on the map, it’s really well done and it’s clear you’ve put a lot of effort into it.
And before I begin, remember all of this is just my personal opinion and feedback, and it might have a bit of constructive critisism along with some recommendations.
Here is my feedback / suggestions:
1- A lack of cooperative: A lot of the game can be done singleplayer, and the coop doesn’t feel really “cooperative”. Most of what your friend can do for you in most scenarios is stand on a pressure plate and help you fight a boss. You could add more use to them, like they go in a different room where they control stuff in your room, and you have to communicate to complete a puzzle, or give the two players different tools so they have a different role, making them both essential accross the map. (Also, to fix doing a good bunch of the map singleplayer you could use coordinate detector instead of pressure plates, as the later ones stay activated for a few ticks after you stand off, allowing you to press both of them and activate the and gate)

2- Too much parkour: Sometimes the map feels a bit too excessive on parkour skills rather than puzzle solving skills or fighting skills, and for some less unskilled players (Like me), getting stuck on those parts and having to repeat them if you die get’s really frustrating. Maybe adding more frequent respawn checkpoints after difficult sections, or adding some way to travel quickly between areas you’ve completed would be nice!

3- Map diversity: I really liked how every map had a unique environment, and some of them unique mechanichs, and you should try to give that even more attention. Giving each dungeon a memorable aspect that makes it different from the others makes the whole map feel better, and you had given each dungeon one or two little things that make it different from the others would’ve made it more enjoyable. Don’t get me wrong, the mechanichs are great, the 3rd dungeon was really good once you know what to do (Except for those hidden ladders…), and the 5th one felt unique for how to traps worked, and while the 6th one was also really creative, lacked a bit of polish (A lot of stuff is well hidden, and most of the times you’re wondering “what to do” or “where to go” instead of how to do it.)

4- More diversity and exploration!: Honestly this is just personal taste, so don’t count it, but if there is one thing I love about adventure maps is having stuff that isn’t the main objective that could be used as an advantage. Hiding emeralds away from the dungeon and having them be usable to get an edge in battle would be nice. For example, you could make the brewer villagers sell different potions that could help you along your journey, or the fletcher better bow upgrades and arrows. I know you did this in the first dungeons, but I was kind of sad I didn’t get to see it implemented further in the game. (Just hide em emeralds under sum clay :D)

5- Little details: In my experience, this is stuff that matter the most. Sometimes just having some particle effects when something happens, or a sound effect here and there when enemies appear, stuff like that makes the experience a lot more enjoyable. For example, when opening the doors in the second dungeon, maybe some “heavy stuff moving” sound effect would make it better. (I saw the sewage particles in the 3rd dungeon (Or was it the 4th one? Cannot remember) and thought “Woah, this people really went all in for detail!”. Another thing that would be a bit tricky to implement is respawning the boss once every player is dead, and preventing them to go in the arena again until everyone fighting dies, to prevent just killing it on multiple lives.

6- Puzzles: This is more of an opinion segment rather than feedback.
Puzzles, instead of them being finding a well hidden item, should be having the item be visible, but the way to get to it be hard.
A lot of the required items to progress are just hidden, which takes away a bit of the puzzle aspect of your map, and replacing it with a search accross the entire map to find something you didn’t see when you first came by. This happened to me a lot, where some of the required items were hidden, so I had to go all the way back to the start and look again, slower and more careful.

And now for the more technical side of my feedback, and the one that you should probably ignore.

The doors: If there is one thing, and I am really sorry to say this, but the one thing that annoyed me the most were the doors. Placing the buttons is fine, but first: A lot of incosistency on using a pressure plate or a button or a lever on doors, it just doesn’t make much sense apart from keeping the progression of the dungeon as intented, but there are other ways to do so which aren’t unintuitive and cheesable. You can use another system for future maps that involves custom NBT for your “keys”, and when you right click a door, instead of opening it with a redstone signal, you can directly change it block state, that way it won’t close again later.
I know it’s a weird thing to complain about doors, but they do stand out with the rest of the mechanichs you implemented.
Also, instead of using sticky pistons, you can use “fill” or structure blocks for the bigger doors, which usually look much better and don’t limit you in size.

Item drops: Most enemies have their default loot table, which clogs up your inventory after some time. You can use a different loot table or disable their drops entirely with NBT, beacuse let’s be real, dropping items in adventure maps is scary, as you never know if you’ll need them later. You can also give a special tag to dropped items with “essential” NBT, such as your keys and /data them every tick setting their pickup delay to 0, so they cannot be dropped by accident.

Minor bugs: There are a few minor bugs that can happen with boss spawning. I am not sure of why they happen, but sometimes they take way too long to spawn. Also, and specially in dungeon 5, you can get some drops that you shouldn’t, like pressure plates. This happens when you use the fill command to remove blocks when there is a pressure plate or button ontop of the blocks being removed. The blocks break and the button drops, still can’t use it because adventure mode, but might be confusing for some.

And yeah that’s pretty much all the feedback I can give. I am sorry if it feels a bit harsh, but well, feedback is feedback. I hope you can find some use in this.
And yes, I know there is no way you can change any of what’s done since it would take a lot of effort to remake mechanichs, but if you read this I’d just like for you to have it in mind whenever you make a future map. Playtest a lot and see if what you’re making feels right. 2 players can break a lot of the map and while that is funny, you should also account for it when making it to avoid accidental progression skips (We literally skipped all of dungon 4, and could’ve skipped big part of Dungeon 5).
And also I’m sorry if it looks like I just wrote “the bad stuff”, but honestly it’s just a tiny part of the map compared to what I’m not talking about. Amazing job with the dungeons, they are truly epic and you captured well the TLOZ style (Specially Majora’s Masks….).
I hope you find any use on this, if you have any questions or better explanations on something don’t doubt in replying to this.
Cheers

Like Share Follow!
Previous ArticleHow to Install Minecraft Maps after Downloading Them
Next Article Minecraft is a Great Educational Game: What Can You Learn from it?