The Legend of Herobrine Mod Description:

The Legend of Herobrine Mod 1.16.5, 1.15.2/1.14.4 aims to add many features related to Herobrine to Minecraft, without straying too far from the vanilla feel, but also not being afraid to take its own creative twists on many things. Summon Herobrine in your world, and prepare for a new adventure. Herobrine is waiting. 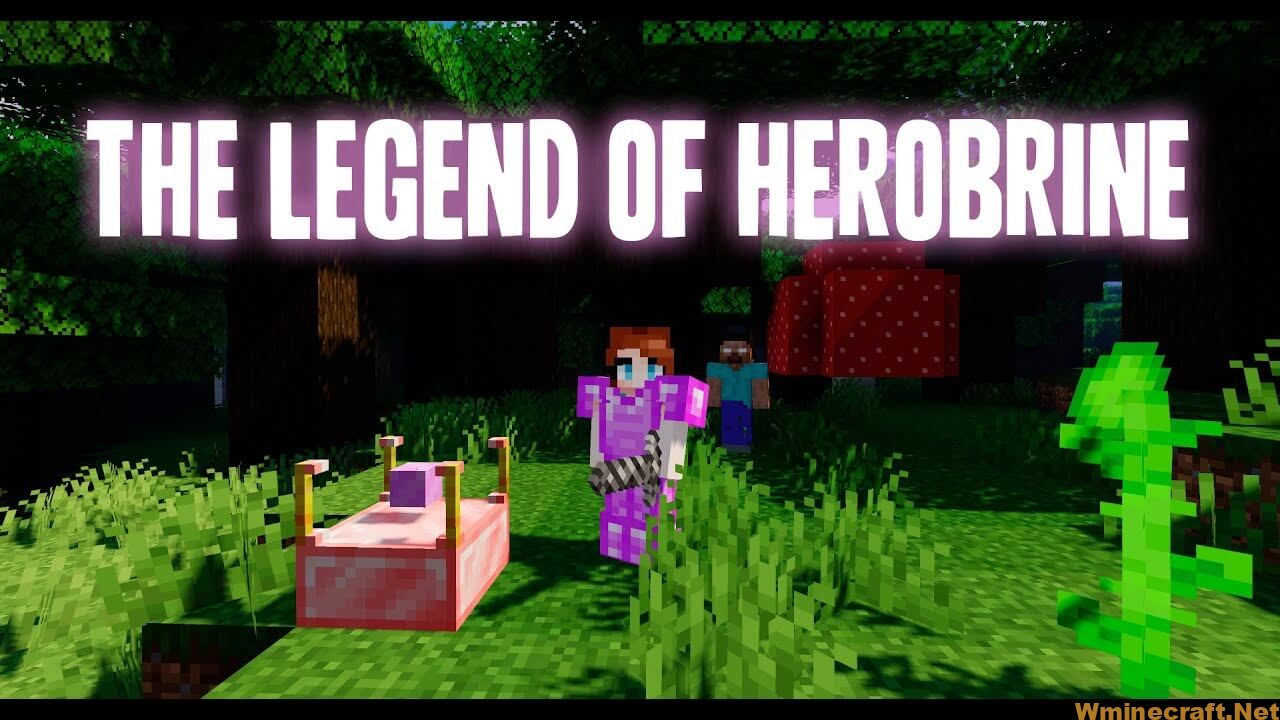 Why can't I find or even spawn Herobrine or Infected mobs?

You need to activate an Altar of Herobrine by right clicking it with a cursed diamond before Herobrine or Infected mobs can exist in your world.

The Altar of Herobrine does not work? Is this a bug or am I doing something wrong?

How do I remove Herobrine from my world?

You purify an Altar of Herobrine by right clicking it with a purified diamond.

I think I found a bug. Where do I report it?

Please report any bugs to the issue tracker which is on the GitHub page linked at the top of the page. If you can't reach that site for some reason feel free to comment on this page.

How do I contribute to this mod?

Any contributions are welcome and if your work makes it into the mod you will be added to the credits. You can make commits to the GitHub page to make contributions to the mod and I will decide if I want to merge that with the branch you requested to contribute to.

Can I use your mods code for my own mod?

Can I use this in a modpack?

Yes, you can! I would also really like to hear about modpacks this mod is included in, but you don't need to tell me about them.

If you want development builds of The Legend of Herobrine Mod follow the tutorial on GitHub: https://github.com/Alex-MacLean/TheLegendOfHerobrine.

Hey everybody so picture this the year is 2011. it is a dark summer evening and you&#39;ve booted up your favorite beta minecraft world to continue your survival build you decide to venture out from your base hoping to gather some feathers from any zombies you encounter your cpu isn&#39;t the best but by now you&#39;ve gotten used to the perpetual render fog that opens up as you travel and closes in behind you you enter a dense forest and round a bend when you see something that just isn&#39;t right a flash of blue in the field of gray a tiny movement that fades in from the fog and fades just as quickly out instantly you freeze you turn the render distance up and look around but it&#39;s gone with no trace left behind it could have been anything a zombie that had survived the night under a tree a block that hadn&#39;t fully rendered in a simple graphical glitch in the game&#39;s working beta version it could have been anything but you know exactly what it was you&#39;ve been wondering for a while if you&#39;d ever see it but now you knew for sure you had just bore witness to minecraft&#39;s most enduring urban legend you had just bore witness to herobrine herobrine has been around for over 10 years now and he&#39;s become as much a part of the community as any legitimate game feature despite his humble origins but his story is scattered throughout the community spread across the internet through years of user interaction and obfuscated by countless strings of misinformation i will be tracing the path of one of the greatest minecraft hoaxes of all time analyzing the spread and development of a modern gaming horror story and following the decade-long evolution of minecraft&#39;s most enduring brush with the supernatural this is a complete history of herobrine the tale of herobrine interestingly enough can be traced back to a single mysterious origin point the year was 2010 minecraft had only existed for about a year and the game was bare bones as it was still in its alpha development phase in the month of august the game was quickly developing and many integral features like survival multiplayer had just been introduced this was the unexplored frontier of the game minecraft&#39;s wild west if you will much about the game was unknown or unsure and the game&#39;s experience was shrouded in mystery it was the perfect environment for an idea that would change minecraft&#39;s community forever somewhere around early august of 2010 an anonymous user posted a single image to 4chan&#39;s x paranormal board accompanied by a short story the image is understandably of very poor quality but its contents are easy to make out the user stands facing a tall hill surrounded by trees the render fog brought on by short render distances encroaches on the edges of the hill and the trees around the player nothing seems to be out of the ordinary until you look towards the left corner of the unusual image a strange figure resembling the standard steve minecraft skin stands motionless hidden unnervingly at the edge of the render fog the figure&#39;s eyes are noticeably absent the original poster stated that this spectre had been stalking them throughout a supposedly single-player world always remaining outside their view but altering the world in bizarre and uncanny ways stripping trees of their leaves building small pyramids and boring small tunnels through mountains the poster claimed that desperate for help they posted about this haunting on many forums before receiving a message from a user named herobrine simply reading stop the poster elaborates on how others reported this same experience and then continues on with claims that herobrine was game developer notch&#39;s dead brother but as i&#39;ve stated before this part is kind of dumb how this original image was made is unknown but a few theories exist as the screenshot was taken in alpha version 1.0.16 and survival multiplayer had been introduced in the version prior the user could have simply invited a friend to their world and edited a screenshot to create the uncanny missing eyes effect herobrine could have been entirely edited into an otherwise empty image and the user could have even used retextured paintings and doors but we&#39;ll get to that later the origin and meaning behind the creature&#39;s unusual name is unknown and it&#39;s unlikely we&#39;ll ever really know as the original poster has never been identified this post created a minor stir but the idea would have likely died out if not for another event that occurred soon after on a completely different side of the internet 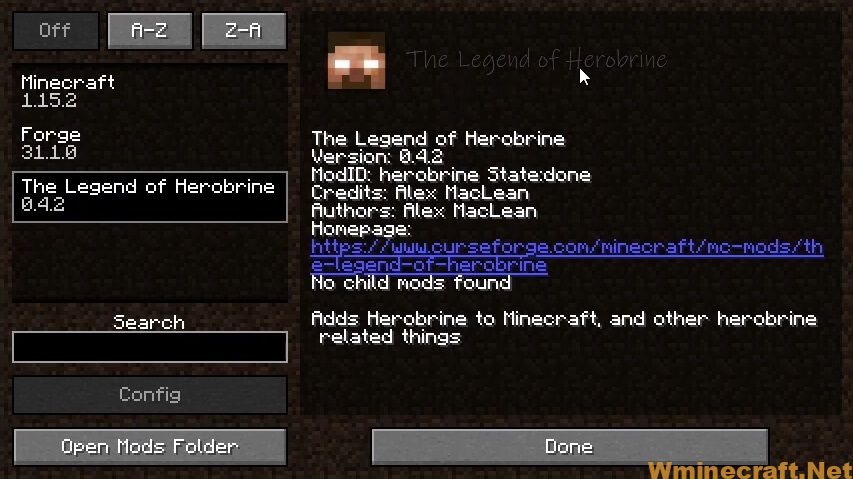 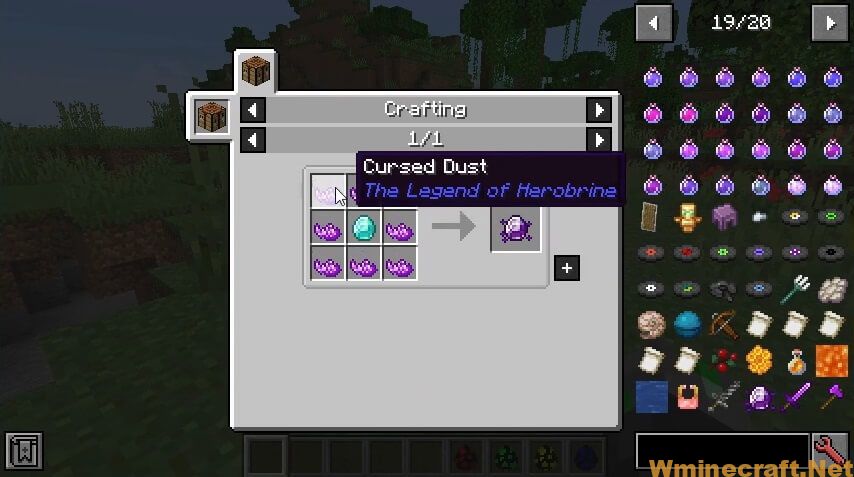 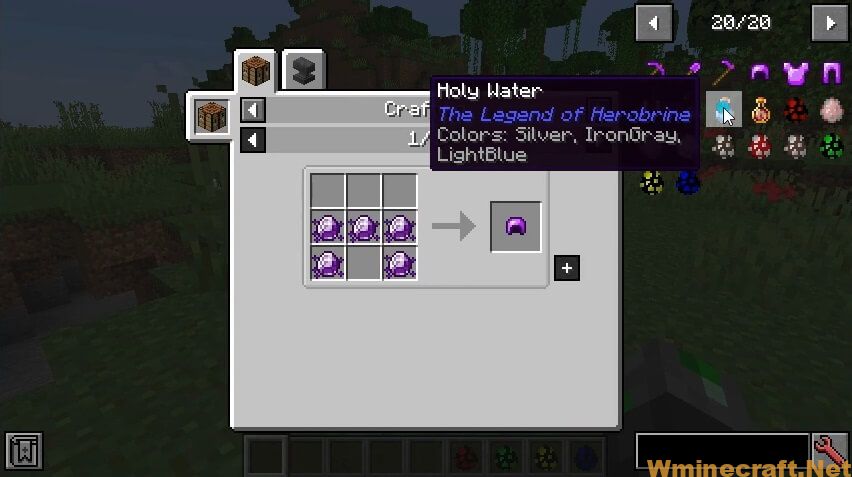 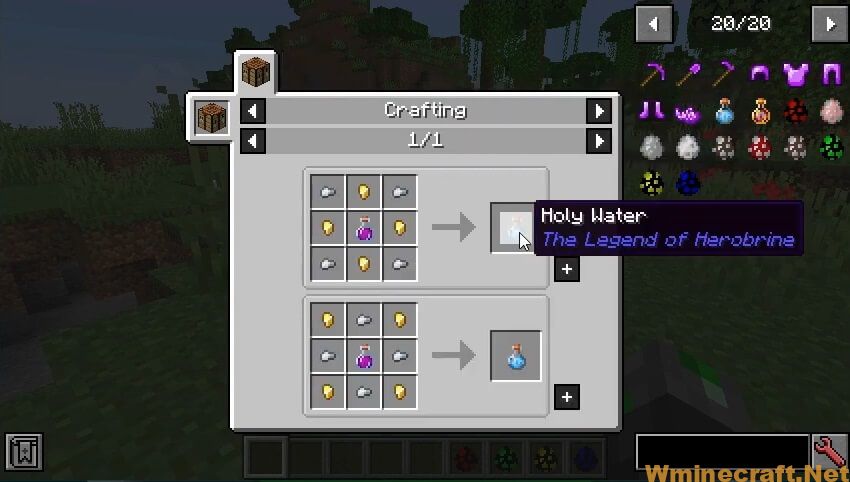 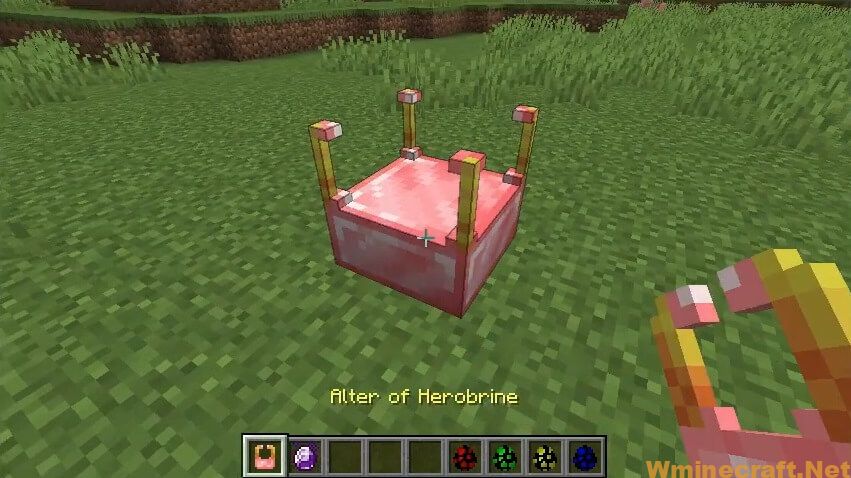 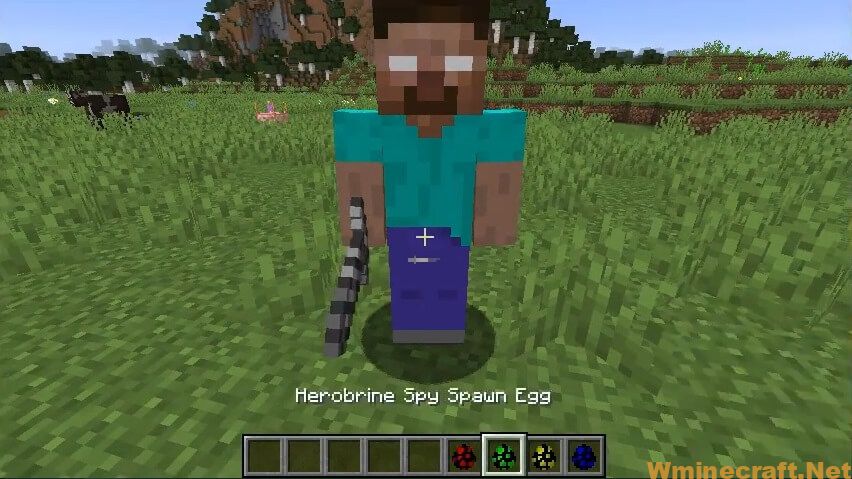 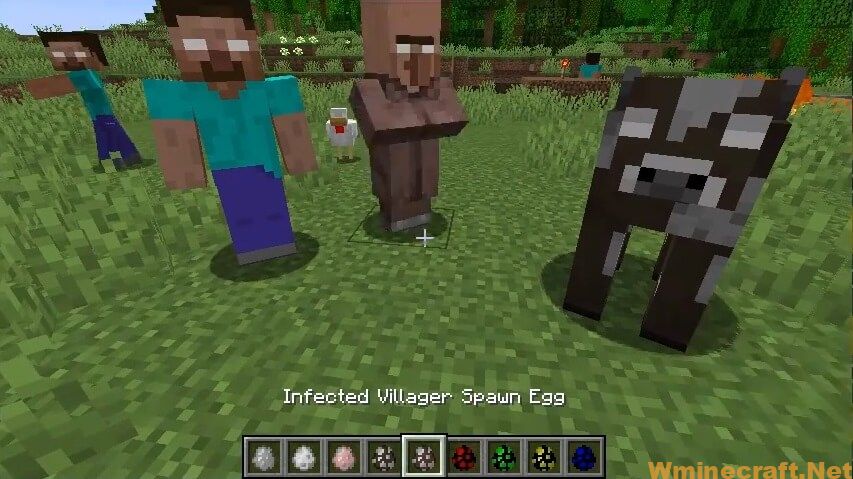 The weapon of choice for Herobrine, and an ultra-rare drop if you’re lucky. Deals 10 damage, 1.6 attack speed, and has unlimited durability. Unobtainable in Survival Mode

It is said this is the dust of pure evil, essential in magic involving Herobrine. 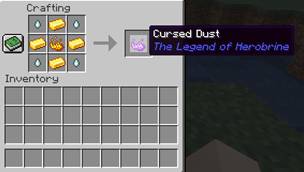 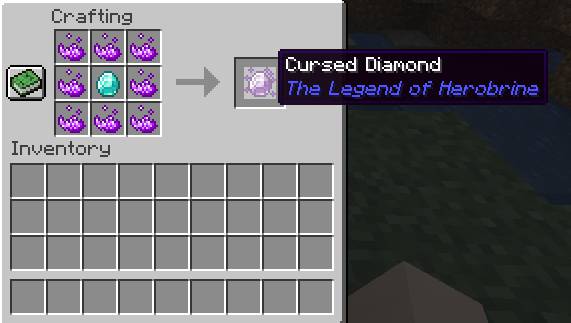 A set of tools and armor made out of cursed diamond, slightly better than a diamond in every way, highly enchantable. Crafted like the diamond variants, but with cursed diamonds. 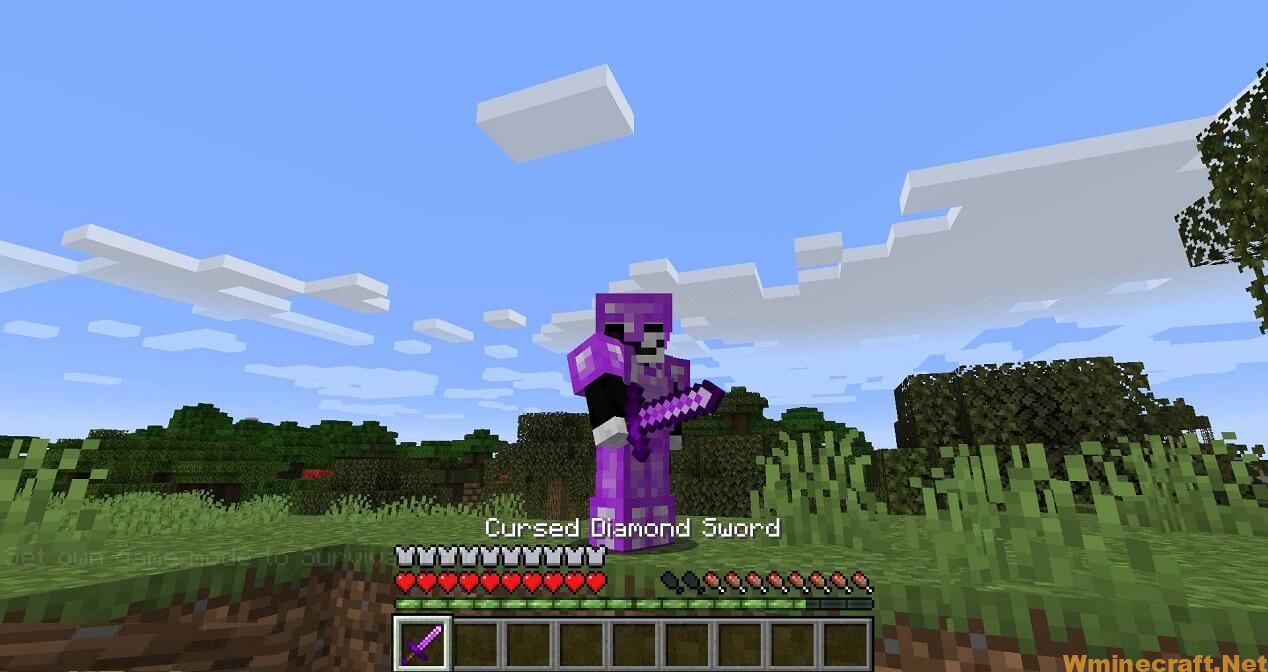 Water Blessed by Notch. Heals almost any creature and bestows them with temporary health boost and regeneration. Has an area of effect of one block. 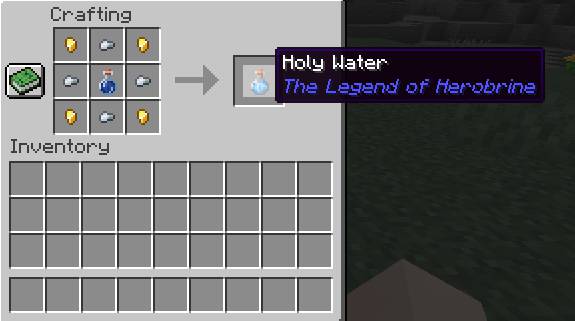 Originally Holy Water, but has been cursed. Effects the target with wither, hunger, and lights them on fire. Be careful, this item has an area of effect of one block. 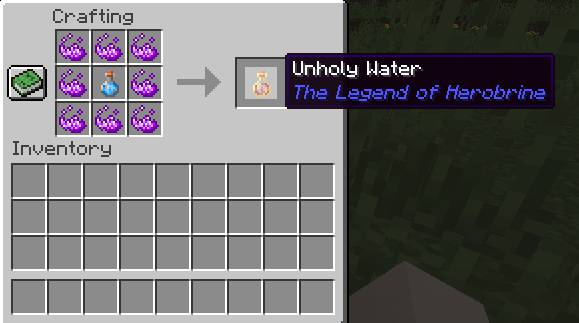 When activated with a cursed diamond strikes a bolt of lightning and places the diamond in the center creating a permanent gateway for Herobrine to enter your world. 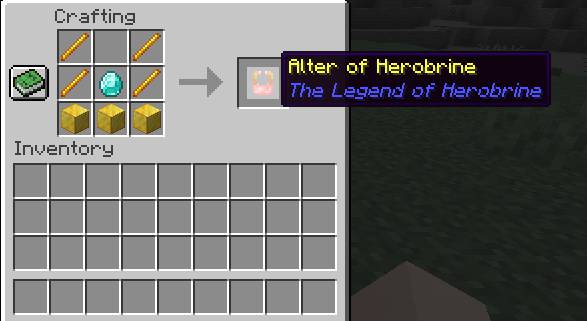 The mysterious figure who haunts every Minecraft world, waiting to enter, and hunt down the player. Immune to Unholy Water

Specialized in combat, very powerful attacks, and high health. Do not engage without at least Iron armor and weaponry.

A mysterious entity, observes the player from a distance before disappearing.

A version of Herobrine that seems to be holding a golden pickaxe, and periodically builds random structures and mineshafts around the world, before suddenly vanishing. Very easy in combat.

A very powerful version of Herobrine, with the ability to tap into evil magic to weaken the player, create illusions of it’s self, or even teleport the player in the air. Before engaging in combat make sure the roof is at least 4 blocks above your head, or you may quickly find yourself suffocating in a wall. 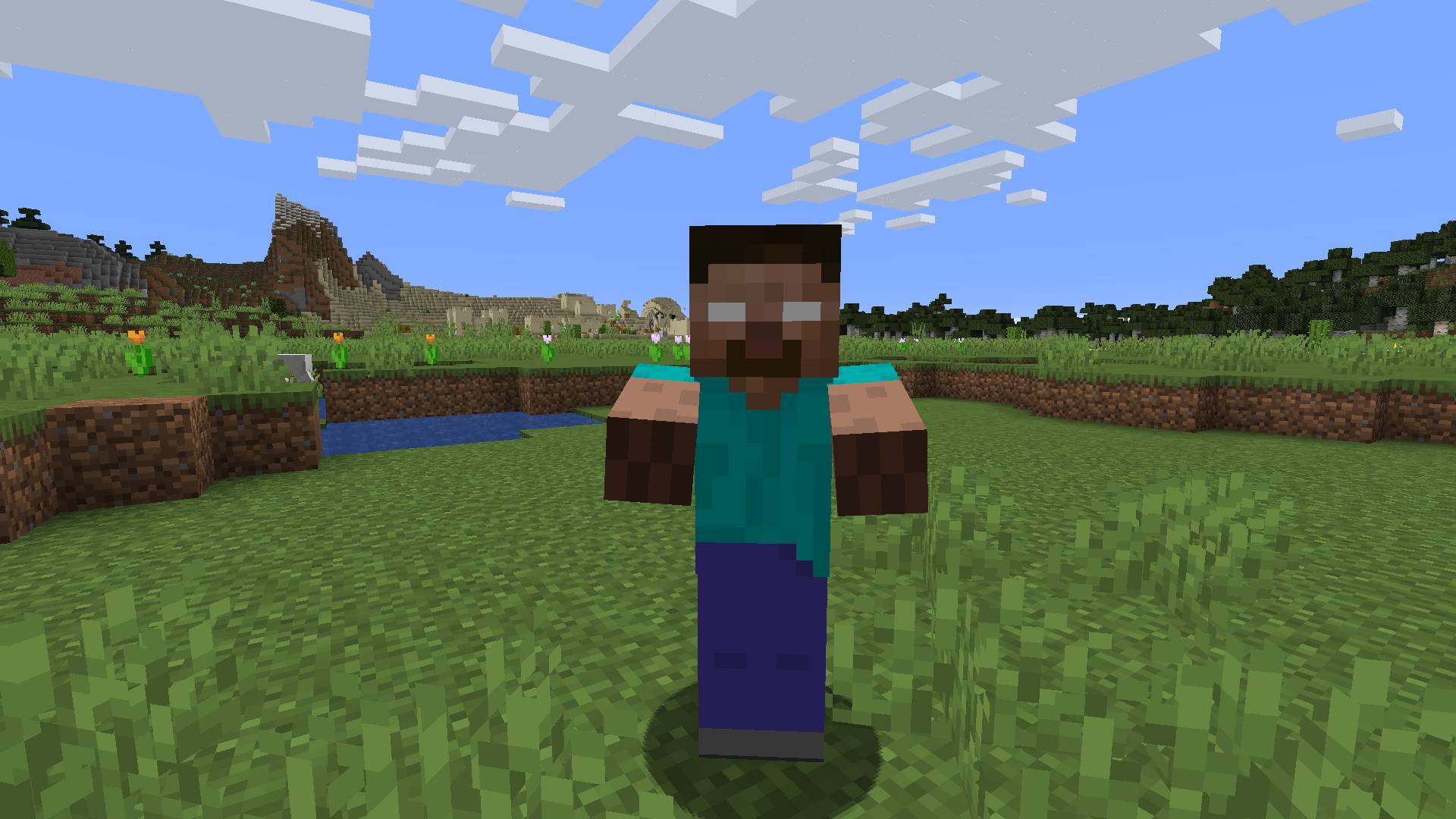 Includes the Chicken, Cow, Mooshroom, Pig Sheep, and Villager. These mobs were once normal mobs, but have been corrupted by Herobrine. 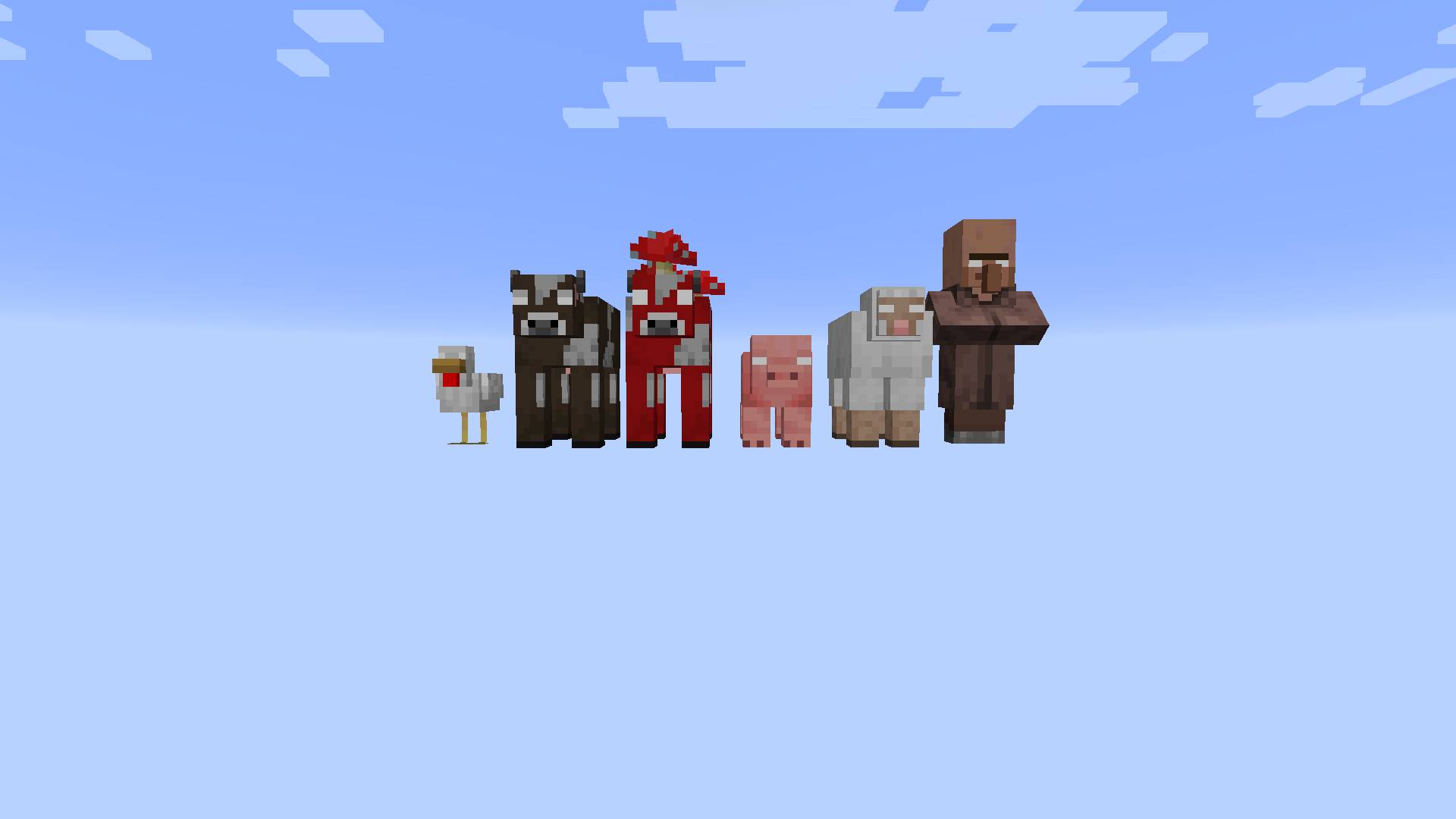 Forests, with most of their leaves removed by Herobrine. Curiously, Herobrine still seems to have some influence even if he is not summoned into the world, as evident in this biome. 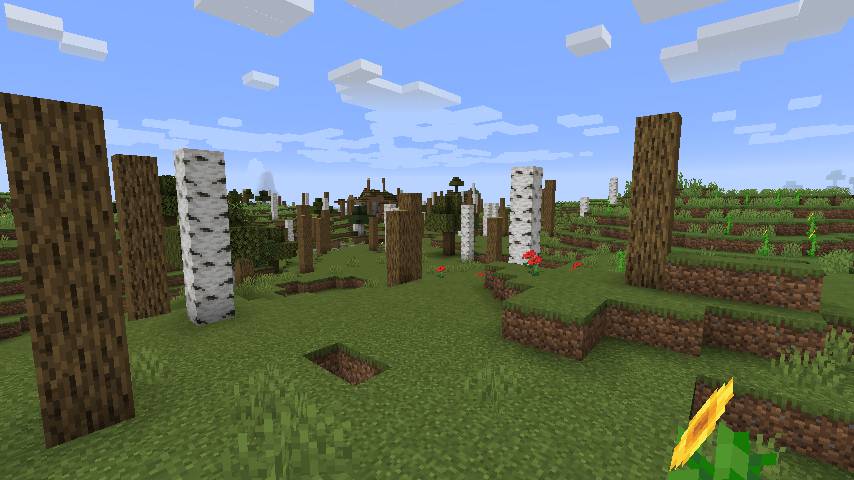 A house suspiciously built in the middle of nowhere. Full of loot and treasures, but watch your step, pressure plates are everywhere and the house is rigged to blow! 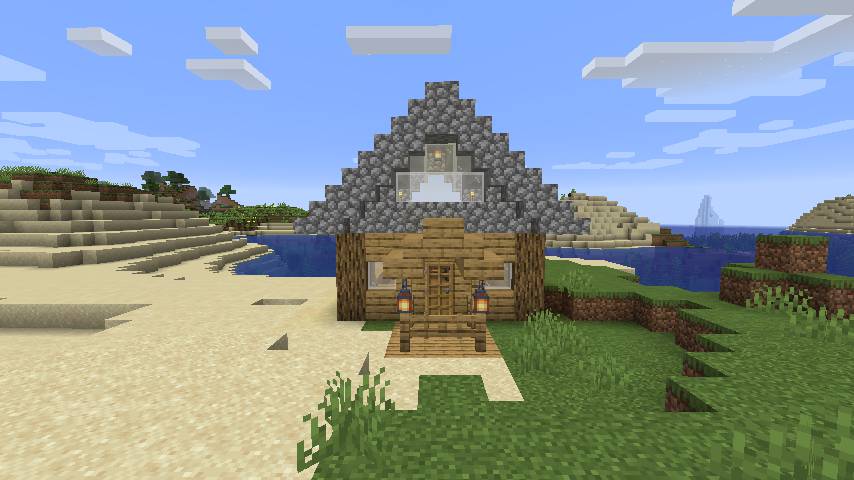 A dimly lit mineshaft constructed by the Herobrine builders while deep underground. Can expose ores, and house mobs. 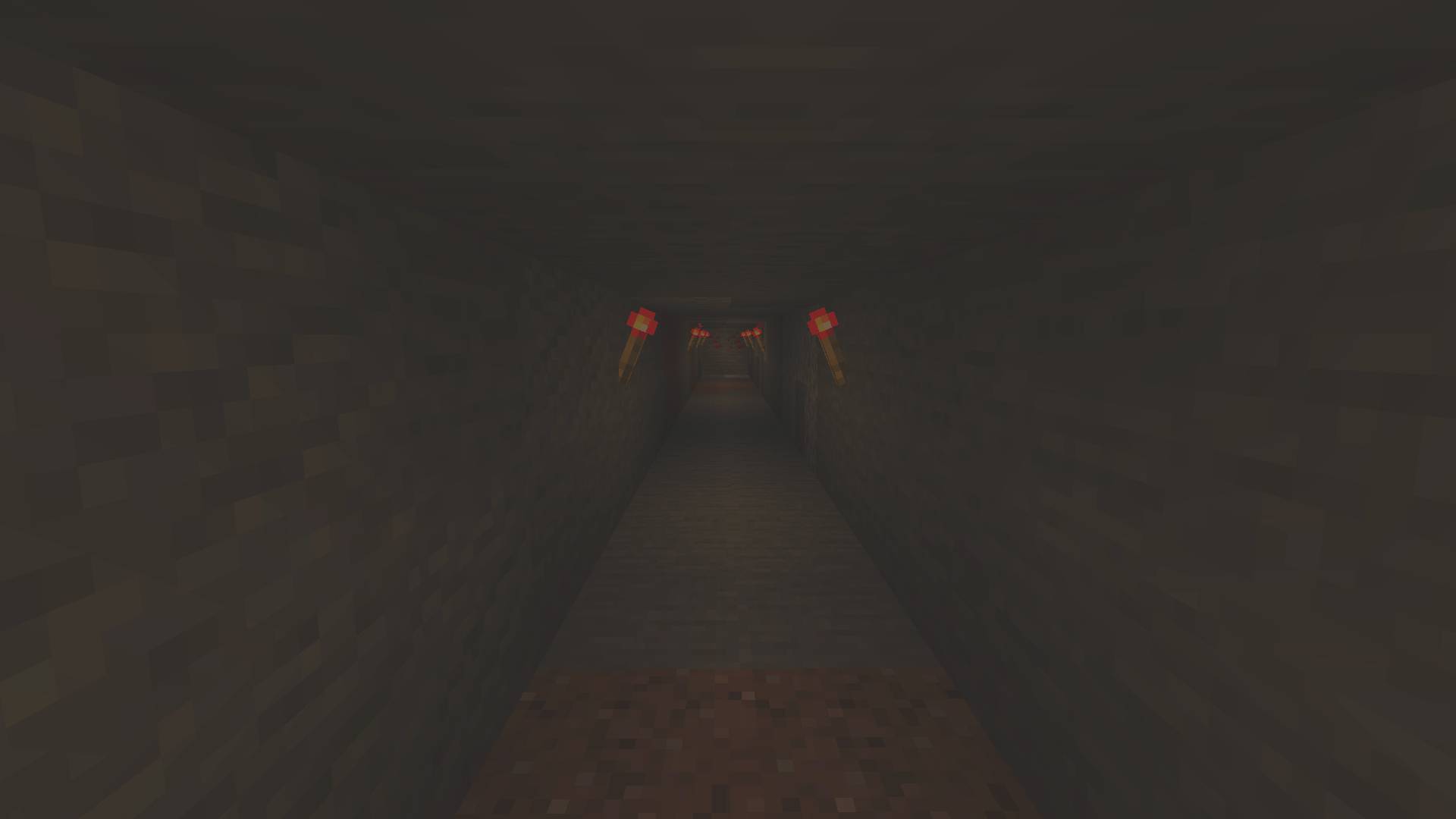 Strange monuments made out of various blocks on the surface in a 3×3 grid with a Redstone torch at the top periodically built by Herobrine Builders. While their purpose is unknown they are very creepy. 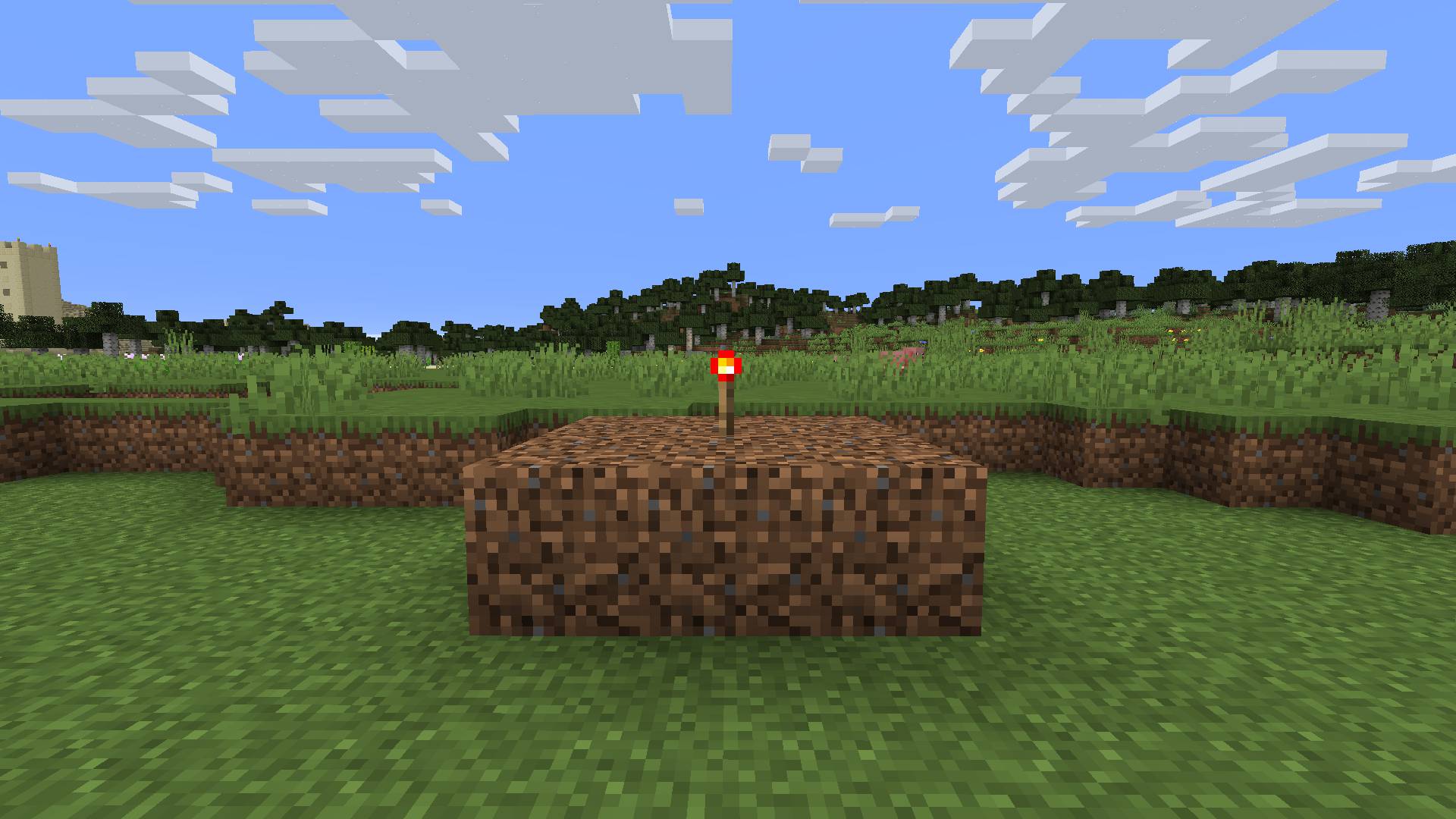 How to install The Legend of Herobrine Mod?

The Legend of Herobrine Mod for Minecraft Download Links: