When it comes to choosing the right enchantment for your Minecraft Sword or Axe, things can be a little confusing. Do you choose Smite or Sharpness? Which one is better? In this article, we will compare Smite and Sharpness and help you decide which one is best for you. Stay tuned! The undead mobs are:

Smite goes from level 1 to level 5 and each level gives an extra 2.5 damage against all these mobs. It goes then from 2.5 to 12.5 extra damage, depending on the enchantment level. 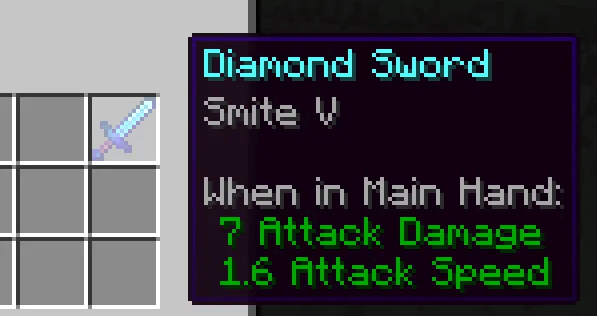 So, as we can see, Smite deals extra damage only to specific mobs, but it deals more damage to those mobs.

Which one is better?

There’s no real answer to this question, since they can be better or worse than the other depending from the situation you find yourself in. Keep in mind that Smite is useless against other players, so Sharpness is the obvious choice in PvP.

Many players prefer to apply Sharpness to their main Sword or Axe, since it works against any enemy (Creepers included), and to keep a Smite enchanted weapon for particular situations. which we are going to see in the next section.

When to use a Smite enchanted weapon

There are three situations where you should choose Smite instead of Sharpness:

How to get them

We already covered how to get every enchantments in the article How to get Silk Touch easily. The methods explained in that article will work for Smite and Sharpness as well.

If instead you want to get these enchantment using cheats, you just need to check below. Cheats are also the only way to obtain a weapon with both the enchantment.

How to get them – commands

You can enchant a Sword or Axe with these enchantments using cheats. To do so, keep the weapon in your hand, open the commands and type:

If you want to enchant your weapon with Smite or Sharpness I instead, you just need to change the ‘5’ with the level of the enchantment that you want.

Note: if you enchant your weapon by using cheats, you will be able to apply both the Smite and the Sharpness enchantment. Since they are incompatible enchantments, it is the only way to do it.

You may not think it’s a good idea to use only one type of weapon, but if you are fighting an unpleasant group or just don’t want any more trouble with the undead then this article is for YOU! Thank me later when we get back on track. See ya and take care everyone 🙂