Corail Tombstone Mod is a useful Minecraft Mod for you to keep all your assets after you die with a tombstone… personality.

Although it is not the first mod developed with this idea in mind, Corail Tombstone Mod easily impresses Minecraft players with its customizability, aesthetic elements, and other small details.

Suppose the Stats Keeper Mod helps keep the character’s stats after sacrificing. In that case, the Corail Tombstone Mod will preserve all your equipment, armor, etc., if you accidentally die in the magical blocky world.

Many situations cause players to die, such as being destroyed by mobs, falling from above, being assassinated by opponents… Install Corail Tombstone Mod so that the mod generates a tombstone at the exact location where the character died; it has the character’s name and sacrifice time.

If you return to that location and then click, you will regain all the equipment in the inventory at the time of sacrifice. In particular, the mod will automatically equip the character with armor.

Not only saving assets for the character but Corail Tombstone Mod is also equipped with many features of survival and teleportation in space, in a medieval fantasy atmosphere related to the souls of the graves.

You will ask the question: how do we remember the exact location where the tragic character died? Don’t worry because the mod will give you a grave key to lead the way.

The player has the right to upgrade the ticket to teleport directly to the tombstone and disappear automatically if the monument no longer exists.

You can even craft some scrolls, activate them with souls. The mod supports all servers and can be used in any world.

However, you must be in Survival mode to keep the inventory set to False and have at least 1 item lost to spawn the target set automatically. 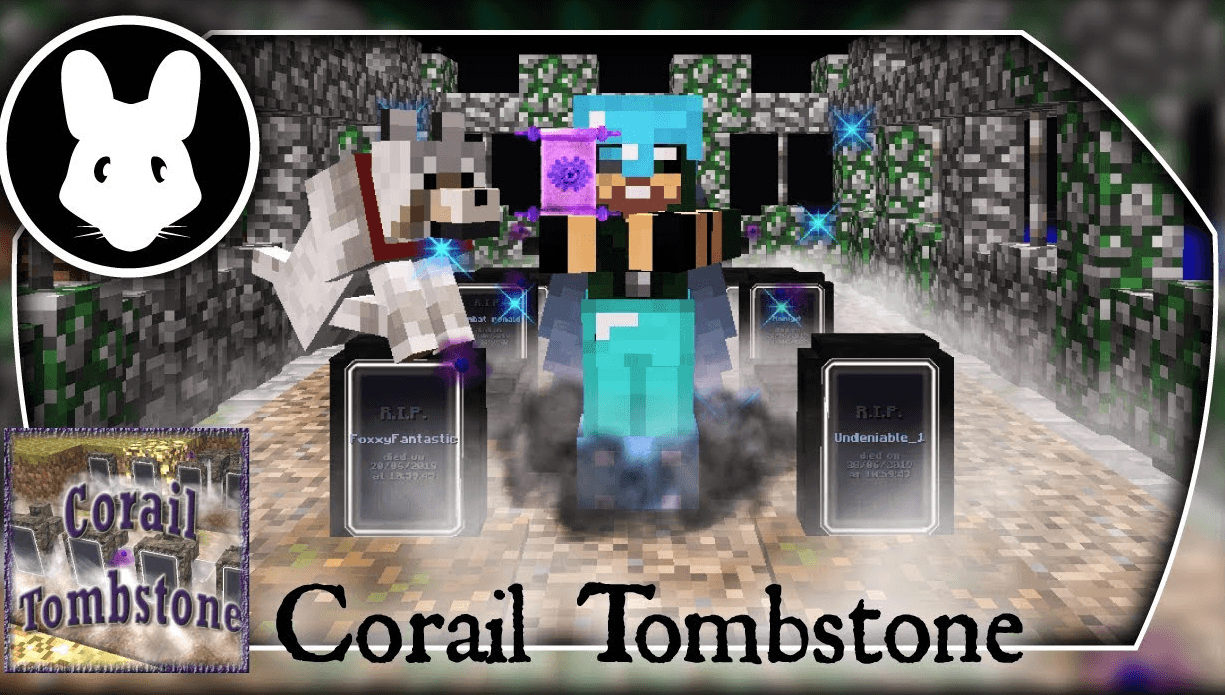 Hint: one of the rewards you get is a randomly decorated grave.

Scroll of Unstable Intangibleness : provides a potion effect making you invincible for one second every 5 seconds
Fishing Rod of Misadventure : new fishing rod (with more chance to have junk while fishing)
Lost Tablet : found while fishing in the junk loot table, and allowing to discover some structures and teleport to it
Dust of Vanishing : makes you vanish in a smoke column preventing monsters to target you for a short time, and teleport you on the same time to a safe backward location allowing an easy retreat
Soul receptacle : to set a soul on a grave for creative purpose and modpack reward, and prevent to die if the player has one on him (breaking the item)
Voodoo Poppets : prevents you to die from some specific damages (the recipes are unlocked with the Perk)
Book Of Disenchantment : strips the enchantments of an item
Scroll of Feather Fall : slowing any fall
Scroll of Purification : dispels your negative effects over time
Scroll of True Sight : allows to see clearly in water and by night
Ankh of Pray : allows to pray on a grave to earn some knowledge points, and can also be used on a soul to reset the perks tree (the soul is consumed)

Players earns knowledge points each time they use a grave’s soul to enchant an item, when they free a soul from a receptacle, by praying near a decorative grave with a special item called Ankh of Pray (with a cooldown of 6 in-game hours), or by accomplishing the tombstone advancements.
Theses points allow you to unlock some perks in a special gui “Knowledge of Death” (the keybind in “misc” is not defined by default).
The perks are small bonus related to all the features of tombstone, instead of providing them by default (some of them will be displayed based on what is allowed in the config).

Hints: advancements can reward knowledge points with a custom function
-> the syntax is “rewards”: { “function”: “tombstone:knowledge//amount/1” }

The compendium is a special section of the gui of the Knowledge of Death that provides infos, linked between them, about Tombstone.

To encourage people to participate to the mod by reporting bugs (thoses taking them time) and by providing translations, a temporary special bonus in game is granted (in general, it’s never removed). Translations can be provided by private message.
The bonus can vary from one version to another and are anyway ‘minor’ (like the choice of special grave model).
Note: it’s expected to display the name of people having contributed to translations in the Compendium in a coming version.

Follows 5 Steps below to install Download Corail Tombstone Mod for Minecraft on Windows and Mac :

Enjoy Download Corail Tombstone Mod for Minecraft, If there is an error, please comment on this article we will support. 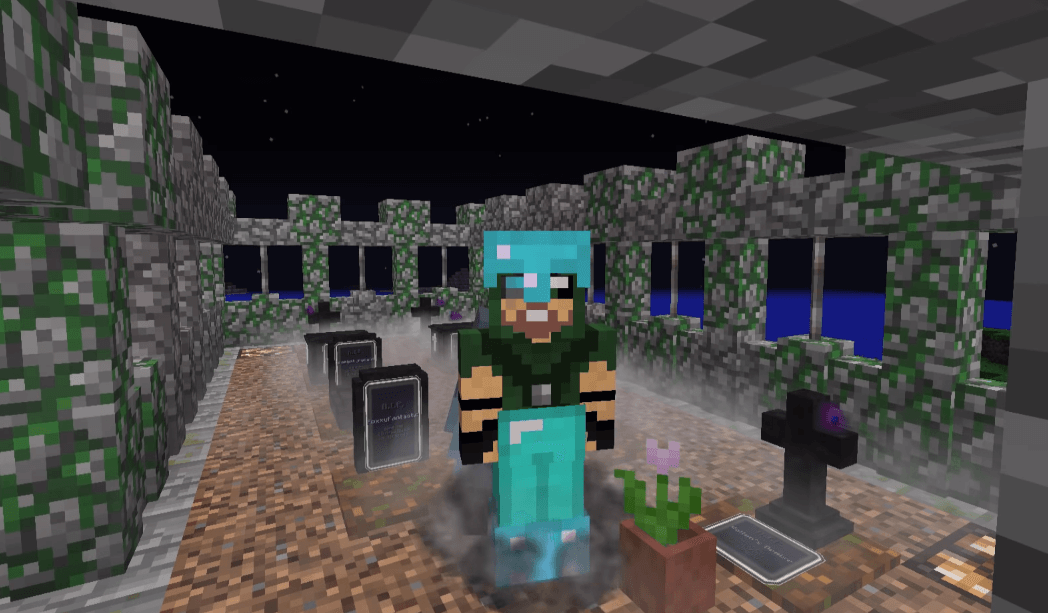 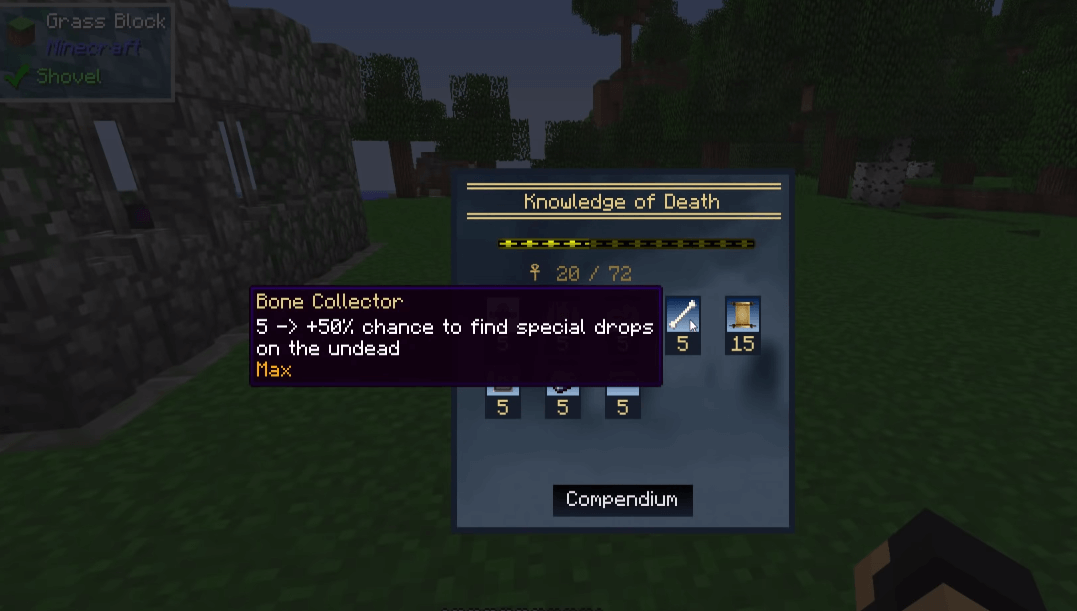 Q: Will this mod work with other mods?

A: Yes, Corail Tombstone Mod works perfectly with any other mod that doesn’t change the vanilla graves.

Q: Is this mod compatible with other mods?

A: Yes, Corail Tombstone Mod is completely compatible with any other mod.

Q: Can I use this mod in survival mode?

A: Yes, it’s possible to use Corail Tombstone Mod in survival mode.

Q: What if I have a question or problem?

A: You can always contact me on my profile page or by opening an issue on GitHub.

Congratulations on successfully installing Minecraft Forge and experimenting with Corail Tombstone Mod for Minecraft downloaded.
If there are errors, please comment on this article.